The store will not work correctly in the case when cookies are disabled.
Free delivery and return shipping on orders over $99
Posted in: Community

Diving deeper into Lisbon’s motorcycle culture, Jonathan Wieme takes you by the hand for part two of Motorcycle Cities, Lisbon. Where more American cultural influences meet the beauty of the winding road along the emerald hillsides and golden beaches of Cascais to then stumble upon a treasure trove of dystopian weirdness that’s also very much part of what makes this trip worthwhile. Jonathan will explain, don’t you worry.

I'll rewind a bit in time because David's narrative started long before today. His passion for two wheels began at an early age when his father put him on the tank of his 1955 BMW R50, and as they worked together on his father's bikes. Time passed and school was not necessarily his best friend. But at some point, a time comes when you must make decisions about your future.

An uncle of his, who'd traveled a lot in his life, and who is currently living in Brazil, told him about a friend of his who lived in Orlando and who'd trained as a motorcycle mechanic at MMI, the Motorcycle Mechanics Institute. This university has two campuses. One in Orlando, Florida and the other in Phoenix, Arizona. It also turned out that, on a trip to the Algarve in the 1970s, David's parents had met friends who were living in Phoenix at the time – this is already crazy. His father took him to visit the MMI campus in Phoenix and David decided to enroll. His goal had always been to be self-employed and independent. This is what the course prepares its students for. Far from just offering theoretical training, the standard is quite high, the pace is intense, and the emphasis is on the practical. He opened David's Performance in 1998 directly after his training at MMI. That was 24 years ago.

Speaking of Harleys, they've always been the engine of his passion, what makes him tick. He'd grown up surrounded by this Harley culture, even before his training in the States. It's no coincidence that MMI is the only school in the US sponsored by Harley. After six months of general training in mechanics, he moved to the ‘Dark Side’ – because the trainers are all dressed in black apparently – where everything to do with Harley was the sole focus of his work and training. Things dropped into line for David... He explored the mechanics of Harley machines with their knuckleheads, flatheads, panheads, and later shovelheads.

At David's Performance, you can drop your Harley off for all kinds of maintenance, performance, and modification work – from simple modifications to complete rebuilds and customizations. As long as it's pre-'99, everything’s fine, with the small exception of the Sportster pre-2003. Optimizing mechanical performance and working on the aesthetic aspect is what motivates this garage. And what he particularly likes about Harley, especially the older models before the twin-cams, is that they're built to last, to be rebuilt, nothing is thrown away, and everything can be fixed.

The high degree of compatibility between the different components and models offers great scope for experimentation and many modification possibilities. This allows you to build a Harley with a ‘50s engine, a ‘90s gearbox, a frame from another era, all with updated performance. A mechanical LEGO to ignite your creativity. In his showroom it's easy to confuse the aesthetic year with the mechanical year. Harley is proving to be an excellent base for whatever you want to build. I see it as work-in-progress in the direction of a British-inspired Bobber.

This is also what defines David. Back in the States, for example, where I was able to visit Indian Larry Motorcycles and meet Keino Cycles, you go for a certain style. You buy what comes out of the garage, as it is. Here, together with David, the customer specifies what they want their Harley to look like, as well as the desired performance and riding behavior. There will always be an element of the ‘designer’s touch’, but in the end, everything is possible and it's the customer who has the final say. At least until today. For the first time, David is working on his own creation, a motorcycle primarily for himself.

He has also built three bikes in Portugal, which are street legal. So there are three 'David's Performance' motorcycles, built from scratch, on the road in Portugal. But this kind of adventure is too dangerous and too costly, so it will stop at these three.

Rumbling stomachs can be heard... It's time to ride. Manuel and I go to meet Jonny, who's waiting to have a light lunch with us. Jonny Cazzola, co-founder of MALLE – an independent British brand, well known in the motorcycle world, that offers a range of accessories, luggage, and clothing to accompany you on your wildest motorcycle adventures. MALLE is also the brand that organizes several crazy annual events, of which The Malle MILE must be the best known. Jonny decided to move to Lisbon, near Sintra, and operate from Portugal. And I suspect when I arrive, that this beautiful Honda XR600 in its original glory is his. My R nineT is not respectable, but I nevertheless decide to park next to it.

After lunch, we leave to join our new host. I can feel that Jonny is in a playful mood... that's good. I want to know what the R nineT has to offer after this meal. We look at each other... a small 'check'... a big smile and rooooar, full throttle towards the N6. A winding coastal road linking Lisbon to Cascais. We zigzag between the cars and enjoy the roundabouts and curves that the road offers, while taking the time to look at the beautiful landscape when the traffic and the road allow it. Things get even more fun when you turn left toward the heights. The curves and uphill bends follow one another and my smile under my helmet grows bigger mile after mile. No time to grieve at the end of the run, because here we are in front of the huge portal of Nirvana Studios. A portal, a place, as if lost in nowhere, that transports us into a new world.

Here at Nirvana Studios, you find yourself disconnecting, or reconnecting, in an extraordinary place. On the left, a gigantic locomotive overlooks the entrance. Down the street; studios, creative spaces, car wrecks, motorcycles, sculptures of all kinds... Where am I? This is a steampunk, post-apocalyptic universe, where I feel like an actor in Wild Wild West or Mad Max or the imaginary world of Jules Vernes. Manuel and Jonny are already waiting for me with Michel Alex, one of the three co-founders who are going to guide us through this place and the history of Nirvana Studios.

We're taken back to the end of the 19th and beginning of the 20th century, when a series of fortifications, called the ‘Campo Entrincheirado de Lisboa’ or ‘entrenched field’ were built to protect the Portuguese capital against foreign invasions from land and sea. These fortifications consisted of forts and other military installations, such as ammunition warehouses; which were connected by a road exclusively reserved for the military. Hence the name of this road, L'Estrada Militar in Barcarena.

After, the latter's use was followed by neglect, the place fell into disrepair until it was acquired and restored by the Custom Circus company founded by Michel. In 2004, the site opened its doors as an alternative cultural center, a first in Portugal. Dozens of groups reside on-site, a space of almost 270,000 square feet, over 25,000 square meters, entirely dedicated to culture, to the promotion and development of new creations in every imaginable form. Nirvana Studios creates synergies and is a trend factory in the avant-garde cultural landscape, with over 500 events and performances per year.

The motorcycle certainly has its place here. It is even omnipresent. It is integrated both aesthetically and culturally. But it's not the two-wheeled version that's the attraction here, it's the monowheel version. The company built a monowheel – two already, in fact – which is currently on display in a museum. A smaller version can be seen here on site and is used for various performances. For those who don't know what I'm talking about, the monowheel is a vehicle straight out of the future where the driver sits inside a big wheel.

While Michel tells us about his history and that of Custom Circus, we visit one of the studios and a few special places on the premises. You feel good, safe, comfortable; and let yourself be transported. And – as when visiting any place that leaves its mark on you – it takes some time to recover. So what better way to do that than to head back to the center of Lisbon and have a nice cold beer with some of Manuel's friends. 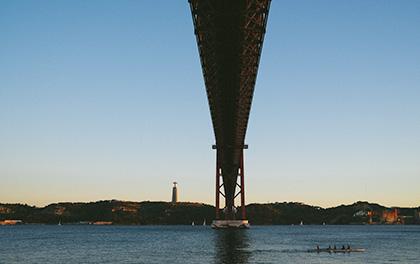 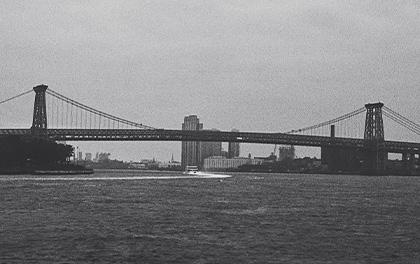 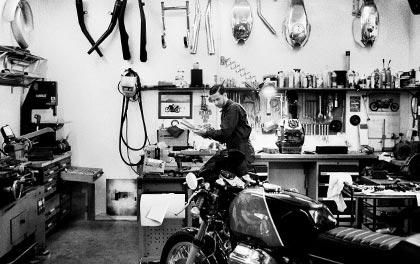