The store will not work correctly in the case when cookies are disabled.
All of our gear is CE certified
Posted in: Products, Travel, Collaborations

Dominator 3 GTX & Defender 3 GTXStarting the Morning off RightThe next morning we set out on the quick 35-mile (56 kilometer) trip to the spring. Paving the way were dirt roads and some double-track; a journey that should take an hour at most. After that, we could make our way to Leslie Gulch with plenty of time for lunch.
Then having Things go Wrong

The road was so smooth, wide, and beautiful as it wound its way south along the river. There were some puddles but we didn’t think anything of them or why they would exist until they became larger and the areas in front and behind became increasingly muddy and treacherous. Somehow, it did not occur to us that the massive rain the night before on the Alvord might have also fallen in other areas. Like here.

I soon found myself struggling to keep the bike up on a rather unremarkably flat section of road. The surface was like glass covered in grease.

My handlebars had no influence on direction; the bike plowing forward into a ditch as I turned full lock away from it, slowly and gracelessly falling over.

With feet slipping, I picked it up, remounted, and fell over again. Matt and Scott saw my tracks and took different lines but all the lines were mud, and soon we were all stuck. They helped me lift the bike and as I fell again. Matt noticed my problem; the front wheel had packed solid with mud and was no longer spinning - the kiss of death.

“But all of us wanted, so badly, to see this magical place.”

An hour of lifting and pushing bikes through a football field of mud had us considering skipping the warm spring, turning around and getting on with the rest of our day. But all of us wanted, so badly, to see this magical place. I walked to the top of the rise and a bit past and found the road was pretty solid. Surely that was the worst of it…

We continued this thinking through one muddy section after another. Thinking that we had been through the worst of it. Bikes falling over and getting stuck followed by a short section of dry road. Eventually we started riding around the mud in the sage brush next to the road, which presented a different set problems: rocks, thick sage bushes, and no path at all. It was a damned if you and damned if you don’t situation. Sometimes we’d come to mud and be so tired of the sage we’d ride through only to fall and get stuck in the mud again. Or we’d ride around the mud only to get stuck in yet even more mud hidden in the sage. There was no winning this war.

This lunacy went on for 6 hours during which we covered 6 miles (9,5 kilometers). One mile per hour (600m per hour) is half the speed of your average turtle.

The small and light Myth BMW was far better suited to this than the big adventure bikes and I’d switched bikes with Scott when I had become too tired of picking the Ducati up over and over again. He was getting along well with the Ducati but wrestling an extra 200-300 pounds (90-136 kilograms) will zap your strength no matter who you are. All the power and sophistication of the big bikes did not help with the mud or bushwhacking we were forced to endeavor.

At 15 miles (24 kilometers), we came to a literal and figurative fork in the road. To continue toward the spring was to risk repeating the same choices we’d made and possibly breaking a bike or, worse, a bone. At best, we’d be sleeping in the desert with no cell service, no food, and next to no water. We broke a cardinal rule of the outdoors by telling no one where we were; a desolate road that might not see a person for a month. A veritable display of poor decisions brought us to this fork.

“No one ever plans to kill themselves when they go on an adventure, but it happens all the time.”
Making bad Choices

No one ever plans to kill themselves when they go on an adventure, but it happens all the time. Those situations are rarely the result of a single bad choice, and more often, the result of cascading errors. One bad choice begets another, like doubling down after losing a bet you only get father and farther behind. We’d already made a few bad choices each time we pushed through the mud hoping it would get better. Now we faced possible cascading failures if we continued on.

Sometimes the smartest thing to do is give up.

“Similar to “Summit Fever,” we had “Secret Hot Spring Fever”

Similar to “Summit Fever,” we had “Secret Hot Spring Fever” and we’d made some poor choices that had damaged the bikes and battered our bodies. Scott went on a mission to scout the other fork - with any luck it would be dryer and our retreat easier. It was not.

While the mud changed character, it did not abate. The retreat road was far smaller; at points nothing more than a faint cow trail. Rocks became more prevalent and the mud a bit deeper. Our only consolation was that we were at least getting closer, rather than farther away, from civilization.

After almost 12 hours of pointless struggle, we arrived back in Rome, the place we started, having accomplished nothing besides a huge amount of wear and tear on our equipment and our bodies. As my father used to say, “Sometimes the magic works and sometimes it doesn’t.” Today was certainly a bust in terms of making mileage and reaching destinations, but it was a good reminder that seemingly innocuous situations can be treacherous, and that giving up on a goal can sometimes be the smartest solution.

“A second night in Rome seemed like pouring salt onto an already open wound.”
When in Rome. Again.

A second night in Rome seemed like pouring salt onto an already open wound, so we decided to ride the 30 miles (48 kilometers) to Jordon Valley if only to get a different dinner, a different motel room, and hopefully a different start to the day in comparison to the one we had before.

The following morning, muscles sore from our day of dead lifting motorcycles, we headed to Leslie Gulch. While not well known, the small road to the Owyhee canyon is spectacular by any measure. Spires of red rock tower above a small winding dirt road. We had hoped to have more time to explore the area but our epic adventures the day before threw off our schedule’s flexibility. We took a few passes for photos and then headed north for lunch.

Bringing it All Together

One of our goals for the trip was to tie in the many landscapes of Oregon. The mountain road on Day 1 of our trip but was thwarted by snow, so Matt mentioned a road that seemed like it might be the perfect way to add “mountains” to our geographic tour. At almost 400 miles (640 kilometers) away, we’d need to put our heads down to get there before dark.

It took two fills of our giant tanks before the temperatures plummeted as we approached Mt. Hood. Aside from our night of rain on the playa, our trip had been largely one of temperature extremes rather than precipitation. This changed as we started the climb through the tall pine forests that wound to a high alpine meadow just as clouds began to obscure Mt. Hood. We pulled out cameras to document our final geographic achievement as the rain began to fall.

“It might be the perfect way to add mountains to our geographic tour.”

We had our last dinner in the town of Hood River before parting ways with Matt; Scott and I had only one more hour of riding before we’d get home. Under a bridge we put on our rain liners when it became apparent that the downpour wasn’t letting up.

We rolled home 16 hours after starting our last day and 1,500 miles (2,400 kilometers) from when we started the trip. We’d ridden all the landscapes that Oregon had to offer and shot over 8,000 photos and hours of video. It was not the adventure we planned but absolutely the adventure we wanted. Which, in hindsight, is perfectly okay with us. 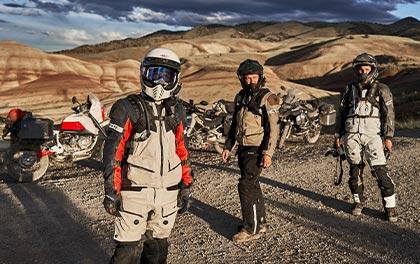 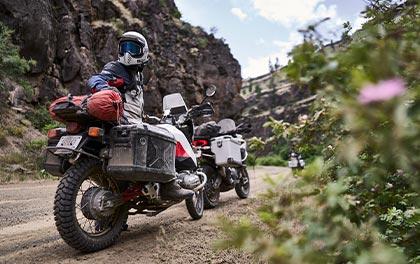 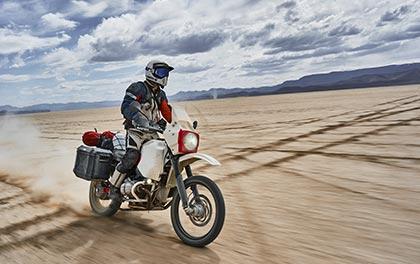